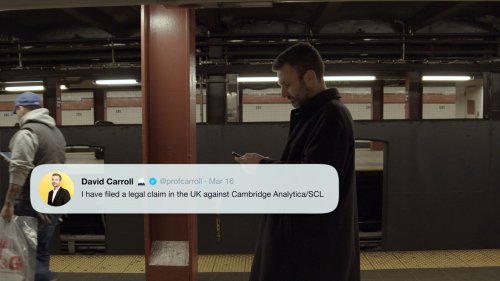 The story here (recounting the whistleblowing that brought Cambridge Analytica’s political interference to light in 2018, ultimately bankrupting the company) is of course interesting. However, The Great Hack doesn’t have a whole lot to offer beyond what those with even a somewhat cursory knowledge of the scandal already know/would suspect. As a result, the doc ends up feeling a bit one-dimensional, and like perhaps all of the “cool” graphics are being used to pad the film’s (already slightly bloated) run time.

The Great Hack spends a lot of time focusing on one of the two whistleblowers, Brittany Kaiser, who was one of Analytica’s executives throughout their involvement with the Trump campaign and Leave.EU. However, I’m not sure she’s as complex of a subject as the film thinks she is. For all the time the film devotes to discussing it, her motivations for doing work with Cambridge Analytica that she (seemingly) morally disagreed with seem relatively straightforward, and in the grand scheme of things not particularly shocking.

More interesting to me, actually, was the other whistleblower, Christopher Wylie, who is interviewed for the film but not featured as heavily. At one point one of the Analytica top dogs asserts that Wylie wasn’t at the company during the time period that’s mainly in question, and seems to suggest that Wylie doesn’t know what he’s talking about. I was confused about why the film includes that footage, yet doesn’t bother to explore the point any further. It could have at the very least added another wrinkle to the story.

For some of the ways that I found The Great Hack underwhelming, though, it’s hard to deny how mind-boggling it is to watch the film’s explainer segment on how Cambridge Analytica allegedly worked their “magic” on a 2015 election in Trinidad and Tobego, paving the way for their future endeavours. And in other instances, too, the film does a good job of succinctly describing what can be (at least for me) the slightly nebulous concept of HOW exactly Cambridge Analytica had the impact that they apparently did. The actual plot points of the company’s history is not particularly compelling in the way it’s presented here, but the depiction of their tactics is what really benefits from the doc treatment. If nothing else, it offers a fascinating look at extremely savvy, scary digital marketing at play.

On the whole, The Great Hack is a bit underwhelming, given the incendiary subject matter they had to work with. However, if your knowledge of this story’s details are a bit shaky (as mine were), it’s still worth a watch.