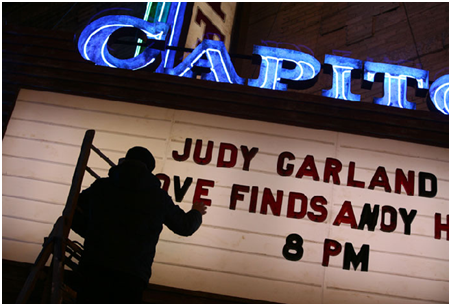 The Good Life is a film that I’d wanted to see for a while, since Patrick Fugit and Zooey Deschanel are two of my favourite young actors, and it was apparently nominated for the Grand Jury Prize at Sundance. I finally got around to watching it last night, and I have to say, it was one of the most disappointing films I’ve seen in a while. The premise seemed interesting (if not a little played out), about a young man who loves old Hollywood movies and feels like an outsider in a small football-obsessed town. But despite the best efforts of the cast, this is just a relentlessly dreary, poorly written film.

Mark Webber plays Jason, a young man from a poor background. After his father’s death, even the money from his two dead-end jobs isn’t enough to pay the electric bill. He has dreams of moving out of his small Nebraska town, but between his dependent mother (Deborah Rush) and the declining elderly owner of the movie theatre where he works (Harry Dean Stanton), Jason feels like too many people rely on him. He meets Frances (Deschanel), a supposedly intriguing young woman who Jason can relate to. Of course, everything goes tragically awry, and a bunch of mopey, quasi-philosophical voice-over narration ensues.

One of the storylines that I did like was the one between Jason and Gus, the ailing owner of the movie theatre. I thought their bond was actually believable, and that relationship had drama and interest without the movie having to force it on with ridiculous situations. I would have liked to see more about Jason’s sister (Drea De Matteo) and her husband, because they seemed like interesting characters, but they were only in two or three scenes in the entire movie. A lot of other talented actors befell the same fate. Patrick Fugit shines in the small part he has, but his character never really goes anywhere. Chris Klein occasionally pops up to play an over-the-top ex-high school football player, but the whole storyline about him terrorizing Jason is just ridiculous. Bill Paxton (also an executive producer here) is in two scenes, and seems to be in the movie solely to blatantly explain the “twist” of the story to Jason. Every character seems to have some singular, tragic characteristic that defines them, but beyond that, their characters are never really developed. They’re all just conveniently placed to revolve around Jason’s story.

And though he didn’t have much to work with, I didn’t like Mark Webber as Jason. I understand that the character is supposed to be introverted and restrained, but Webber just didn’t have any presence on the screen. He seems like a potentially interesting actor, but here, he doesn’t show us much of anything, besides some forlorn stares. Deschanel at least brings some life to the screen, but her character is so absurd, and she doesn’t seem remotely close to an actual person. Everyone’s just a tidy little cardboard cut-out of a supposedly “quirky” character.

Let’s talk about the voice-over narration. A lot of people think it’s a cheap device, but I am a fan of voice-over narration, when it’s done well. But there is far too much of it here, and it often goes on for minutes at a time. The main character comes across so blandly that I think they were trying to make him a “deeper” character this way, but it just comes across like a poorly written high school drama class monologue. The dialogue between characters also seems forced at many points, like its only purpose is to get the minimal plot points across.

The camera work is certainly trying to be arty and “indie”, but only partially succeeds. If so much of this story revolves around Jason’s disconnect with his hometown, they should have given us a clearer picture of what this town looks like. I think that a desolate small town can be oddly beautiful, but the director partially misses the potential of building it into the story. The film did have a certain wintery atmosphere, which kind of worked, but it still didn’t feel fully developed. While a film like Gus Van Sant’s Paranoid Park was all about woozy atmosphere, it still managed to have interesting characters. Similarly, The United States of Leland was not a perfect film, but it had a few really fascinating characters, and still had a distinctive atmosphere. The Good Life seems like it was trying to have style and substance, but it didn’t succeed in either regard. And after building all that mood and beating its protagonist down so insistently, it throws it all away for a cheap cop-out of an ending. That was the last straw for me. Do yourself a favour and avoid this one. 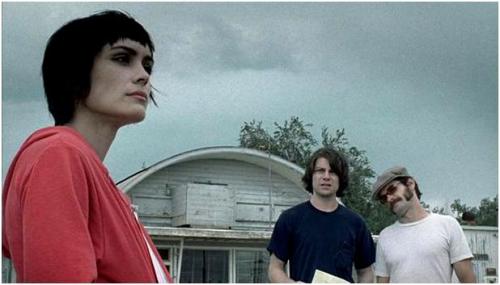 Alright. So I’m starting to get a bit sick of writing and reading about the same movies all the time – especially when we’re talking about current movies. Yes, There Will Be Blood and The Dark Knight are amazing movies. But to make things a little more interesting, I’ve decided to start reviewing less well-known movies. Here’s my review for the 2007 indie film, Wristcutters: A Love Story.

Wristcutters: A Love Story examines the idea of purgatory for those who have attempted suicide. After slashing his wrists, Zia (Patrick Fugit) finds himself in a place that is much like earth, but merely a little more bleak and depressing. In the afterlife, he meets up with a self-destructive musician, and a girl, Mikal, who claims she is there by mistake. When Zia hears that his ex-girlfriend has also killed herself, the trio goes on a road trip in hopes of finding her. When they stumble across a mystical campsite run by a thespian (Tom Waits), things in the movie really take a turn for the weirder. Will Arnett even pops up in a really bizarre (and wildly miscast) role before the film finally finds a way to come to a satisfying conclusion.

Wristcutters is a thought-provoking, interesting film, but it suffers a bit from the odd, plot-heavy second half. I feel that the human interest slant of the film’s beginning was its stronger suit. One of the best scenes of the film takes place when Zia goes to dinner at his musician friend’s house, and discovers that his friend’s mother, father, and younger brother have also “offed” themselves, and they are all now living as a (sort of) happy family in this semi-Hell. This kind of black humour runs rampant through the entire film, and many scenes are genuinely funny. The aforementioned “love story” aspect is also very cute, and helps to lighten up the slightly cumbersome second half.

Though Patrick Fugit plays a character that is similar to his work in Almost Famous, I think Fugit does a great job here. Zia is very likeable, but also a bit of a sap, and Fugit probably plays a loveable fish-out-of-water better than any other actor his age. His wry delivery suits the film’s black humour, and I have to give Fugit a lot of credit for making grim subject matter unexpectedly fun. Strong supporting performances make the absurd story seem believable, as does the beautiful cinematography. The shots of the stark, depressing “American” landscape manage to be off-putting and beautiful at the same time.

The film itself is rather contradictory, and it seems like that’s its purpose. Suicide is shown in a very vivid way (we see exactly how many of the characters wound up in purgatory), yet the whole thing seems a little bit humorous, and almost beautiful. That’s not to say that the film glorifies suicide, but it takes a stance on it that’s both light-hearted and bleak, and manages to pull it off. The storyline about cult-ish religious fanaticism has been done to death (no pun intended), so that aspect seems less fresh, despite the fact that the film is examining it from the other side of the mortality line.

Wristcutters is not a perfect film, but it has so many positive attributes that a dud character here or there (sorry, Will Arnett. You’re still awesome.) and a bit of plot trouble doesn’t hold it back too much. The film’s really unique feel, along with great performances, make Wristcutters a must-see for anyone who enjoys offbeat movies, or who is just sick of the blandness that Hollywood usually offers up.