8 Biopics That Need to Be Made

The “biopic” seems to be a genre of never-ending possibilities. From politicians to serial killers to the inventor of windshield wipers, it seems like every semi-famous person with a life story worth telling gets the biopic treatment at some point. Here’s look at a few famous people yet to have their lives put to film that deserve the same attention.

Hedberg earned a devoted following for his bizarre, stream-of-consciousness brand of humour (currently, Demitri Martin is pursuing a similar style), but had his career cut tragically short in 2005 from a drug overdose. Zahn not only physically resembles the late comedian, but may be one of the few working actors who is genuinely funny enough to do Hedberg’s material justice. 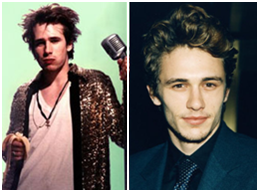 Most famous for his seminal cover of Leonard Cohen’s “Hallelujah”, Buckley only released one proper album (1994’s Grace) before tragically drowning in 1997. His haunting voice has struck a chord with critics and fans since. Though many are against the idea of making a Buckley biopic, the resemblance between Buckley and Franco is hard to deny. Franco did James Dean justice in the 2001 made-for-TV biopic, and I think that he’d do an equally great job with this enigmatic music hero.

With her own musical talent and unconventionally good looks, Gainsbourg seems like a natural choice to play legendary punk Patti Smith. As well as proving her acting chops in I’m Not There and her fearlessness in Antichrist (or so I’ve heard – I’m far too weak-stomached to watch it), Gainsbourg exudes a natural cool that’s essential to pull off Smith’s persona. Maybe it’s something to do with being French?

The diminutive Whishaw may be a bit short to play Drake (who is said to have been over six feet tall), but Whishaw has the alluring mystery needed to take on this enigmatic folk hero. During his career in the late 1960’s, Drake was a relatively obscure figure, but has since had a resurgence in popularity, long after his death in 1974. Whishaw (I’m Not There, Bright Star) has the kind of “old soul” aura about him that would fit with Drake’s music and mystery.

Mackie proved his acting chops in last year’s Oscar Best Picture winner, The Hurt Locker, and he seems like a natural choice to take on this legendary musician. With many of his contemporaries receiving the Hollywood treatment, it seems likely that Jimi’s time will come soon. 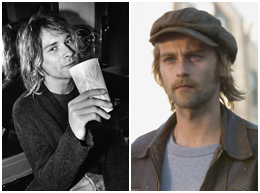 Whisperings of a Cobain biopic have given bloggers something to speculate about for a couple of years now. Ryan Gosling, James McAvoy, Ewan McGregor (who would’ve been a good choice…ten years ago), and Robert Pattinson (don’t worry, that one apparently isn’t true) have all had their names tossed around, but to me, Anderson seems like the obvious choice. The resemblance is uncanny, and on top of that, he’s the right age, and he proved that he has the vocal chops as Max in 2007’s Across the Universe.

Revered for his hushed, tuneful music, Elliott Smith’s legacy has only grown since his tragic death in 2003. Casting a biopic for this complicated figure would be tricky, but Paul Dano is one name that seems to fit. Thanks to films like Little Miss Sunshine and Gigantic, Dano has quickly become heavily associated with quirky indie films (sometimes to the point of type casting), and his offbeat style would likely suit a Smith biopic well.

Rock critic Sheffield’s memoir, Love is a Mixtape, chronicles his early adulthood, and the short time that he spent with his wife before her sudden, untimely death. The story could make a great movie, and Redmayne (a recent Tony winner for Reds) not only looks like Sheffield, but has a soulfulness that would serve the story well.