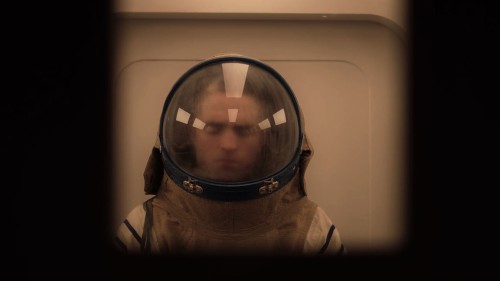 The conception of High Life on its own would be strange enough: septuagenarian French auteur Claire Denis decides to make her first English-language film a sci-fi adventure starring Robert Pattinson. But let me tell you, the result of all that is something much weirder even than you’d expect.

Falling not so much into the “exciting space adventure” subgenre (e.g. Gravity and Apollo 13) nor the “supernatural space horror” subgenre (e.g. Alien and its various offspring), High Life aligns better with the “existential space dread” subgenre that’s been exemplified in films like 2001: A Space Odyssey and Moon. The films opens with astronaut Monte (Pattinson), alone in an austere space ship but for a sole baby. From there, we flash back to the earlier days of Monte’s space journey – including scenes with the crew that originally joined him – and learn how he ended up where he is.

There are no easy answers or zippy plot points in High Life. There are, however, a lot of bodily fluids. Denis does not shy away from how strange and sometimes grotesque the baser aspects of human existence can be. And then, of course, she magnifies them for narrative effect. The result makes for a pretty uncomfortable watch. Not because High Life is extremely explicit or gross, but because there is a boldness to how unblinking it all is. Only someone with as steady of an eye as Denis could interweave all of that with the film’s more bizarre aspects in a way that feels believable.

There is a sadness to High Life, as well. Denis seems very interested in examining the effects of loneliness, isolation, and exclusion (which, as the film seems to suggest, are certainly all separate things). And Pattinson, shaved head emphasizing his interesting but intense features, proves to be a great lead to help convey this.

Things are presented ambiguously enough that I think everyone will take different things from the viewing experience. It’s also a film that enthusiastically invites rewatches; personally, I don’t feel confident enough to say that I “got” everything that High Life is doing (or aiming to do) on first viewing.

Perhaps thanks to the film’s lack of explanation, there was also something about it that felt a bit incomplete by the end. Denis’ vision is undeniable, and on a literal, shot-by-shot basis, this is a stunning film to look at. However, I do usually prefer a little more clarity in the narrative when it’s a film with such a large scope.

Now that I’m a couple days out from watching and have had a chance to let things percolate, though, I think I appreciate it more. It’s a film that’s less about the viewer’s scene-to-scene reaction, and more about the feeling they’re left with at the end, and during the days after.

Certainly don’t go into High Life looking for answers. But if open to the sometimes-uncomfortable questions it poses, you’re likely to find a rewarding (if slightly befuddling) end to the journey.