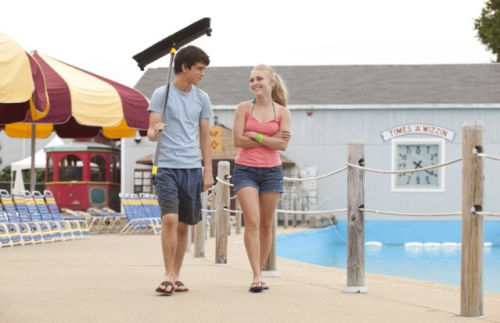 The Way Way Back tells the story of Duncan (Liam James), a shy teenager stuck with his family on summer vacation in a small seaside town. And if you think that sounds like a well-worn premise and are already speculating about the ways that the characters might grow as people by the end of the movie, you’re on the right track; The Way Way Back breaks very little new ground in the coming-of-age genre. Yet somehow, it’s still charming as heck, and I found it to be thoroughly entertaining from start to finish.

There are many good things about this movie, but if you asked me what the one main reason is to see it, I’d have to say it’s Sam Rockwell. He’s an actor who’s impressed me hugely in films like Snow Angels, Moon, Conviction, and Seven Psychopaths, and Rockwell works his magic once again here. This is a movie that balances drama with lots of humour, and Rockwell is the source of many of the film’s biggest laughs. His character, Owen, is likeable and impulsive, and you can understand why 14-year-old Duncan would think he’s cool. But the film does a great job of subtly building Owen’s character and showing us his flaws without relying on some sort of “shocking reveal” or major plot turn to make us completely reconsider his character; Owen is a good person, and the friendship he builds with Duncan is genuinely moving, but he’s also not built up to be a saint. Rockwell always seems to play wonderfully shaded, complicated characters, and even though this is a lighter movie than some of his other fare, he still brings so much heart to the character, and for me, he completely stole the movie.

That’s not to say that the rest of the cast is lacking, though. Allison Janney is perfectly wry and weird, as always, and Carell shows some nice range here playing a pretty shitty guy, and does so believably. And even though I’m getting a bit tired of seeing Toni Collette play “sad mom” characters, she turns in another solid performance. You can feel the warmth between her and Duncan, and the screenwriters and actors do a nice job of showing the similarities of their characters and partially explaining why Duncan may be the way he is without hitting the audience over the head with the parallels.

The film does occasionally get bit too focussed on including its Funny Moments at the right times, and a couple of scenes (such as the breakdancing sequence) feel a bit forced and just aren’t that funny. As well, a there are a few minor characters who don’t seem to serve much of a purpose and probably could have been removed entirely. But while not all of the jokes hit perfectly for me, I found that the movie worked best when writer/directors Jim Rash and Nat Faxon mined true-to-life humour from the awkward, slightly poignant reality of growing up. They capture so honestly what it’s like to be young and shy and they manage to convey that feeling of alienation without getting maudlin. I think a lot of filmmakers avoid focussing on introverted characters out of fear that they’ll come across as boring or inactive, but Faxon and Rash embrace the awkwardness of their protagonist and let his quirks speak for themselves. Duncan isn’t always a likeable or even interesting character, but I found myself rooting for him the whole way through, simply because of how realistic he felt.

When you compare The Way Way Back to recent films like Adventureland and The Perks of Being a Wallflower (which is easy to do) it does feel a touch amateurish. It perhaps hits just as many truths as those films do, but it also offers a more scattered tone that makes it feel inconsistent. But there’s certainly still a whole lot of charm going on, and Rockwell’s great performance gives The Way Way Back a secret weapon that the other films don’t have. It’s relatable, funny, and sweet, and that’s exactly what The Way Way Back needed to be.