Hollywood’s track record for stretching a simple gimmick into a 90-minute comedy has not been great. But now, the cast and crew of This is the End laughs in the face of Weekend at Bernie’s, Year One, and Me, Myself, and Irene, and somehow manages it so that this movie flies past the hundred-minute mark feeling almost as breezy and morbidly funny as it began.

Granted, this isn’t a groundbreaking or even a consistently great comedy, but the jokes land more often than not, and there is something undeniably fun about watching the Apatow crew bitch and moan their way through the apocalypse. They also call in their equally famous friends to get some brilliant, unexpected cameos that are used sparingly but effectively.

In these respects, This is the End provides just about everything fans would want. (They even manage a couple of subtle but reverent Freaks and Geeks references.) And maybe it’s unfair to expect this kind of film to do anything more than that. However, I could help but feel like the whole thing was a bit cheaply constructed. Co-writers Rogen and Evan Goldberg took on directorial duties for the first time, and this may be where ran into trouble. Nobody is asking for Terrence Malick-inspired visuals, but the film has a low-rent look that just pales in comparison to the more cohesive, cinematic polish of movies like 21 Jump Street or Knocked Up. These movies starring the Apatow crew rarely have the cheap or frantic tone that a movie like Year One or Scary Movie does, so This is the End’s lack of finesse unfortunately stands out all the more. It kind of felt like they blew the budget on a couple of CGI-heavy set pieces and figured no one would notice if they cut back on production values a bit and also set 85% of the movie in the same location.

Luckily, the movie is funny and smart enough to excuse most of this. Sure, the rape humour, gore, and dick jokes feel a bit easy, and it would have been nice to get even more of the character-based humour that preys on the actors’ individual tics and insecurities. But the cast here sells what they have to work with. Everyone is great in their own way, but Danny McBride might just steal the show with a balls-to-the-wall crazy version of himself. Then, on the opposite end of the spectrum, Jay Baruchel doesn’t even have many of the big punchlines, but embraces his persnickety, “voice of reason” persona and is actually really good as the closest thing to a “relatable” character that the film offers. He’s also one of the few players who proves to have the chops to pull off the moments of overt vulnerability and (comedic) terror convincingly, which makes him a welcome anchor for the viewer to share the experience with.

Does This is the End completely earn its requisite “heartfelt” moments, given that it spends most of its runtime consciously trying to one-up itself in terms of shock humour and morbidity? Perhaps not. But the character moments are welcome breathers from the chaos nonetheless, and some of the funniest moments are the offhanded anecdotes that no doubt reflect Rogen and Baruchel’s real-life friendship. It’s nice to see the genuine camaraderie among the cast play out, and This is the End is an all-too-rare project that seems to remain true to its vision and gleefully unique in its spirit.

James Franco, You Should Have Taken Notes

I still haven’t seen The Reader, by the way. 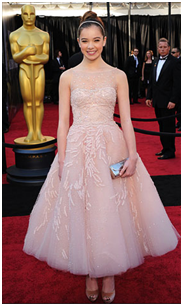 – I like everyone on here (I’ve yet to see any of Jennifer Lawrence’s or Noomi Rapace’s films, but they seem cool, I guess?). I would’ve rolled my eyes at Olivia Wilde (especially in that outfit), but I thought she was surprisingly good in TRON: Legacy.

– Rapace and Anthony Mackie (who is fabulous in The Hurt Locker and Half Nelson) are unexpected choices, but it’s nice to see a broader spectrum of actors here (in other words, I’m glad that they didn’t just pick a bunch of twiggy little starlets…though I wouldn’t have minded seeing Emma Stone on here. But I digress.)

– I like that they’re mixing more established actors (the four lovely folks on the first panel) with smart choices in newer actors. Garfield, Hedlund, and Lawrence were practically unknowns a year ago, but they’re three actors who seem to have a bright future ahead. And I like that Jesse Eisenberg, Joseph Gordon-Levitt and Mila Kunis, who have been acting for years are finally getting their due.

– The men all look verrrrry dapper 😉

Too much adorable for me to handle. Oh, and some insightful discussion and stuff.

The Hollywood Reporter’s “Roundtable” video series has been going for a few years now, but I must admit that this is the only segment that I’ve ever watched. It probably has something to do with the names involved in this roundtable – Ryan Gosling, James Franco, Colin Firth, Jesse Eisenberg, Mark Ruffalo, and Robert Duvall (who seems a bit like the odd man out, to be honest) – that got me to watch the entire hour’s discussion. And it was pretty interesting. You can click here to watch the whole thing.

It’s nice to see actors discussing the craft in a somewhat more natural way. Yes, it is still a contrived setting and there are “moderators” controlling the discussion. But the desperate need for talk show anecdotes is largely gone. At times, it veers into navel-gazing contemplation about the art of acting, but I’d say that the video is well worth watching, if not only for a few choice moments. Highlights (though I recommend watching the video for yourself):

As for the Oscar chances of this group (since awards season is the impetus for these videos), I think all of them have a decent shot. I still don’t think that Franco, Eisenberg, and Gosling can all squeeze into the Best Actor category. They’re just too young. But with Jesse Eisenberg’s Best Actor win from the National Board of Review earlier this afternoon, it looks like he could be a major contender. And with Franco as a virtual lock, I fear Gosling might be left out in the cold. Firth and Duvall will also both likely be nominated for Best Actor. The only supporting player involved here is Ruffalo, and I hope that he can still find a spot in his category.