I’ve had some lists kicking around for a while, so I figured I’d share some of my favourite albums from the past few years with you here. And what better place to start than last year? I don’t think 2008 had quite as many releases that I loved as 2007 did, but there were still some very worthy albums put out there. A lot of new artists proved themselves in a big way.

20. Bring Me Your Love – City and Colour

With his stunning voice and beautiful, simple melodies, Dallas Green’s music never fails to move me. His follow-up to 2005’s Sometimes sticks close to the style that has made him so beloved by indie and mainstream audiences alike, but why try to fix something that isn’t broken? “The Girl” is a fantastic, tender love song, and I love his duet with Gord Downie on “Sleeping Sickness”.

MGMT burst onto the scene with hyped-up hits like “Time To Pretend” and “Kids”. Those are two of the standout tracks on their debut album, but so is “Of Moons, Birds & Monsters”, which comes closer to the end. I’m not sure that I want to know what these guys do in their spare time, but their music is pretty infectious.

I think that if Conor Oberst wants to be taken more seriously as a “grown man”, and release mature music with a different vibe to it, like he does on Conor Oberst, I think he’s making the right decision to move away from the Bright Eyes name. Considering he’s only thirty, this guy’s had a long, consistent career, and Conor Oberst just keeps the tradition going.

17. A Piece of What You Need – Teddy Thompson

Ranging from reedy to rich, Teddy Thompson’s voice adapts easily to the diverse line up of songs on A Piece of What You Need. And while the album’s penultimate song, “Turning the Gun on Myself” is every bit as melancholy as the title would suggest, I like that Thompson manages to keep things sparse and haunting, rather than melodramatic.

They were one of the most buzzed about new bands before they even had a full-length album out, and Tokyo Police didn’t disappoint (much) with Elephant Shell. Their sound really grew on me, and even though I think a few of the songs could be a bit stronger, it’s an incredibly promising debut effort. And they put on a mean live show, too.

I like Transatlanticism and Plans more for the sake of sheer listenability, but Narrow Stairs has some great songs (“Cath…”has to be one of their best yet), and overall it does not tarnish Death Cab’s badge of consistency one bit.

Sell-outs or not (and look at that picture of them – they’re clearly sell-outs), Kings of Leon released a batch of great songs on 2008’s Only by the Night. There are good songs beyond the hits, but I’m still not sick of hearing “Sex on Fire” or “Use Somebody”. And my favourite radio station has been playing them consistently for over a year.

Matt Mays is one of Canada’s best kept secrets, and he’s been putting out great work for a while. Some might compare him to Ryan Adams or even Bruce Springsteen at times (but really, who isn’t compared to Springsteen these days?) but he’s definitely worth listening to on his own merits. Great sound, great voice, great songs.

Evil Urges is probably the best summer album released in a while. It’s impossible to pin it down to one style, but I think that most people could find something on here that they like. It’s all a little twisted, but it’s also a lot of fun. The anthemic “I’m Amazed” is just one of the many great tracks here.

These indie favourites disappointed some with their latest disc. I’m not familiar with much of their older music, but their quirky style sure impressed me here, and according to me, Mount Zoomer was the best Canadian release of 2008. Side note: why do I find Dan Boeckner (far right) so attractive, when he is so clearly nothing but trouble?

I have a bit of a love-hate relationship with Beck Hansen. (Perhaps I should say, with his music. It makes me sound less crazy.) It’s pretty much what it sounds like. Sometimes I love his music, and sometimes it bores me to tears. But when he teamed up with Danger Mouse (The Grey Album, anyone?) the result fell drastically towards the “love” side of the spectrum for me.

9. Gossip in the Grain – Ray LaMontagne

Ray LaMontagne can do no wrong, in my eyes. Gossip in the Grain is packed with a slew of great little songs (including the much-discussed “Meg White”). All three of his albums have been good, and LaMontagne will surely earn himself a reputation for being one of the most consistent singer-songwriters around.

8. Viva La Vida or Death and All His Friends – Coldplay

Flame me all you want (who am I kidding? No one reads this blog), but I love Coldplay. After a bit of a misstep with 2005’s X&Y, they returned in fine form with their fourth album, Viva La Vida. If it’s possible, they’ve amped up the theatrics, and written some of their best songs yet. Viva la Vida, indeed.

Before Accelerate came along, R.E.M (arguably) hadn’t made a great album since 1992’s Automatic for the People. So when they came back with a concise, (mostly) filler-free set of songs, it’s understandable that their fans reacted in such a big way. But Accelerate isn’t just good by “new R.E.M.” standards. It’s just really, really good.

I know that every blogger and their mom loves Vampire Weekend (literally – my mom and dad listen to their album frequently!) But this album was just way too good to pretend to hate. Time will tell if they become a one-album-wonder (remember when the The Strokes were the next big thing?) but what an album it is.

5. Consolers of the Lonely – The Raconteurs

I’m probably going to like anything that Jack White is involved in, and The Raconteurs’ debut album, Broken Boy Soldiers, introduced me to the wonderful world of Brendan Benson. So the odds were pretty high that I’d like the sophomore effort from this “side-project”. But they actually surpassed my expectations and released an album that I know I’ll be listening to for a long time.

One of the year’s most surprisingly fantastic releases came from this plucky Brit. Comparisons to Lily Allen continue to run rampant (for pretty good reason), but I might actually like Kate Nash more. She goes from sassy to melancholy in the blink of an eye, and Made of Bricks is one of the most listenable female singer-songwriter albums I’ve heard in a long time. Quirky, but not self-indulgent.

I feel a little bit guilty about succumbing to all of the buzz bands from 2008. But they put out such great new work, that it’s impossible to ignore. Fleet Foxes was no exception. Their shimmering, earthy folk is beautiful, and I find myself finding new favourite moments every time I listen to the album. 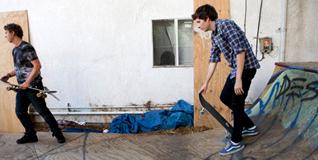 Refreshingly different from a lot of the stuff that I was listening to last year, these California punks are apparently leading their own movement (Canada’s own Japandroids are similarly great). Nouns is raw and fuzzy, but also has a great pop sensibility, which is key for me.

I know, I know. But I couldn’t help it! There’s a reason that For Emma appeared at the top of just about every blogger’s list last year. It’s that good! I think Justin Vernon is one of the most promising new artists around. “Skinny Love” is already a classic, and the rest of the album is gorgeous, too.