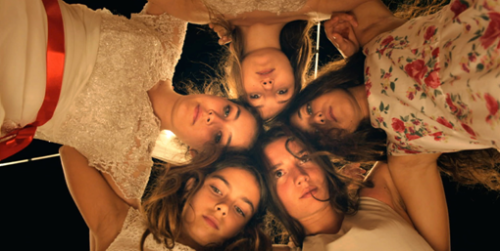 Each year, it seems like the first film I see at TIFF ends up becoming one of my favourites of the whole festival. (In case you’re curious, my picks from past years that fall under this category are Lore, Tom at the Farm, and Eden.) And after seeing Mustang yesterday on the 2015 Toronto International Film Festival’s opening night, I feel pretty confident that tradition will continue. From first-time director Deniz Gamze Erguven, it’s a beautiful, assured debut that marks the arrival of another name to watch for in Turkish cinema.

Mustang tells the story of five girls living under the oppressive and careful watch of their relatives in the Turkish countryside. Having lost their parents years ago, they’re now at the mercy of an old-fashioned grandmother and tyrannical uncle who both expect them to get married ASAP. However, being modern pre-teen and teenage girls, the sisters have rather different and comparatively rebellious interests that their family fears could compromise the girls’ ever-important chastity.

Mustang is a lot of things at once. From the film’s purposely chaotic, fervent opening to its ultimately poignant conclusion, Erguven reflects the jumble of emotions that come along with growing up. There were moments that had the crowd roaring with laughter and others that respectfully deal with some truly dark and difficult themes. However, despite its emotional highs and lows, I didn’t find Mustang‘s tone inconsistent.

Helping to ground the proceedings in believability is the film’s five stunning lead actresses. If The Virgin Suicides (a film that’s nearly impossible not to compare Mustang to in more ways than one) treated Kirsten Dunst as its centrepiece and the rest of the sisters as beautiful, sad props, Mustang differs wildly on that front. The sisters begin as a sort of wild, indistinguishable unit that are nearly always together. But as fissures in that bond start to form, each actress gets an opportunity to shine as their characters meet various fates. It was highly refreshing to see five distinct and realistic female characters share the screen, and I give a lot of credit to Erguven for writing such rich roles.

As much as I’m raving, I also wouldn’t describe Mustang as a perfect film. Erguven’s inexperience as a director does come across occasionally with a few scenes that feel a tad mishandled, including the film’s climax, which took perhaps too dramatic of a departure from the rest of this fairly low-key film.

Mustang offers a little bit of everything, including the kind of robust and engaging narrative that arty world cinema isn’t always known for. It’s also an all-too-rare film that tells its story from a perspective that is both spunky and unmistakably feminine. Take all of that and combine it with absolutely breathtaking cinematography and a great Warren Ellis and Nick Cave (!) score and you’ve got one of the most exciting directorial debuts of recent memory.