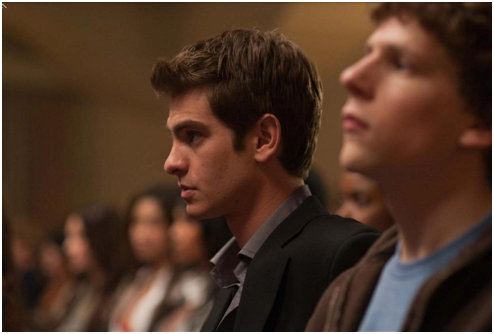 …and it was pretty fucking awesome. Not quite the masterpiece that some have been calling it (but virtually no movie is), but still a total ride. Going to a film opening day is almost unheard of for me (something about my extreme cheapness and distaste of crowds puts me off), but I’m so glad that I went.

I just wrote an 800-word review for my school’s paper, so I don’t feel like elaborating too much, but I will say that I love Jesse Eisenberg and Andrew Garfield even more now, if that were possible. Still not convinced about their award season prospects, but they’re both quite deserving. Jesse Eisenberg was actually kind of scary in it, in the best way possible. And yay for Andrew Garfield’s little black boxers!

David Fincher’s the man, and he’s done it again. Maybe it’s not quite on Zodiac level, but it’s pretty close.

The final shots of the film were so perfect (though I was kind of not expecting it to end right then). Very sad, in a way, but it seemed like the only way it could have ended.