Diane Kruger looked absolutely stunning last night. I could see how her dress might divide some people, but I thought it was one of the few bold, memorable dresses on the red carpet. The only other ladies who I thought really hit the mark were Anna Kendrick, Meryl Streep, and Rachel McAdams.

I still can’t decide if I like Vera Farmiga’s anemone dress or not. And Demi Moore looked nice in a scary, skinny, never-aging kind of way.

The honour of worst dressed goes to the top half of Miley Cyrus (weird fit in the bodice, and for God’s sake, stand up straight!), the bottom half of Zoe Saldana, and J-Lo for her crazy quilt blob of a dress. 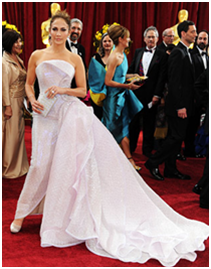